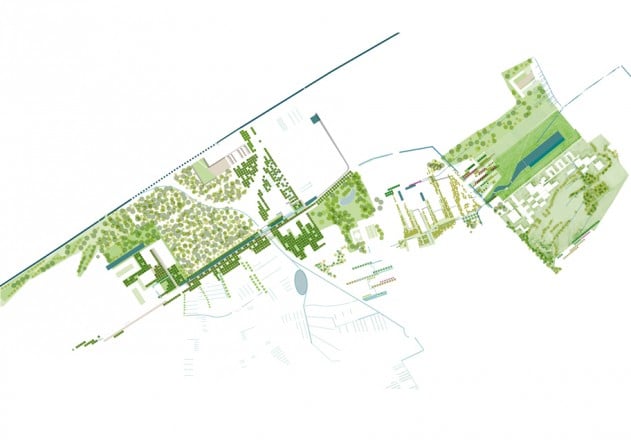 Creating synergies, building connections and embedding the territory in an ecological framework should help to convert a fragmented, car-based post-war development in Belgium into a more resilient area. The design focus was strategically shifted from the urban structures to the landscape as an initial structuring framework.

The region around Kortrijk (Belgium), known as the “Texas of Flanders”, due to the high density of its small and medium-size industry, is a fragmented and diffuse urban territory. Its chaotically-ordered morphology, its “promiscuous landscape”, where industry, services and residential developments are scattered everywhere over the territory, can be read as a pars pro toto of the unsustainable sub-urbanisation that de facto dominates much of post-war Europe.

In 2012 a plan was made for Leiedal, an inter-municipal organisation in Southwest Flanders, to rethink Hoog Kortrijk, the car-based, post-war city extension south of the medieval historic core and the highway that was built along functionalist lines of activity separation. Dispersed urban functions were relocated there, clustered and rationalised, which gave way to an archipelago of mono-functional campuses, business parks and similar introverted enclaves.

A victim of its own success, and thanks to its (almost exclusive) car accessibility the district continues to attract major regional investments that worsen traffic congestion, while there are no longer public budgets for infrastructural upgrades and extensions. The recent construction along the E17 highway of a large hospital by Austrian architects Baumschlager Eberle is slated for continual expansion and was built without an appropriate plan for either traffic flow or parking.

The area desperately needs vitality and above all spatial cohesion. Local policy makers regret the absent links with the historical city. Large-scale, big boxes mark the territory and to date visitors to the Xpo, the regional hospital, health facilities, the business park, retail, regional colleges and the university do not linger in the area.

Other than the few fragmented residential enclaves there is almost no everyday life in the area – the exception being perhaps the petrol station that also happens to be a newspaper shop. The on-going densification of the area causes flooding problems downstream and is increasing its ecological disintegration to an alarming level.

Further fragmentation of the dense, yet diffuse territory remains the greatest threat. The countryside structure of farms and rolling hills only remains visible at the southernmost edge of Hoog Kortrijk, on the crest line from where a finely meshed landscape structure clearly unfolds as a patchwork of farms, nestled with remarkable regularity in the topographic and hydrologic structure of the territory. […]

For more information on smart densification and vegetal infrastructure in Hoog Kortijk, read on in Topos 90 – Cities and Landscapes.