Israels Plads: Between Park and Market 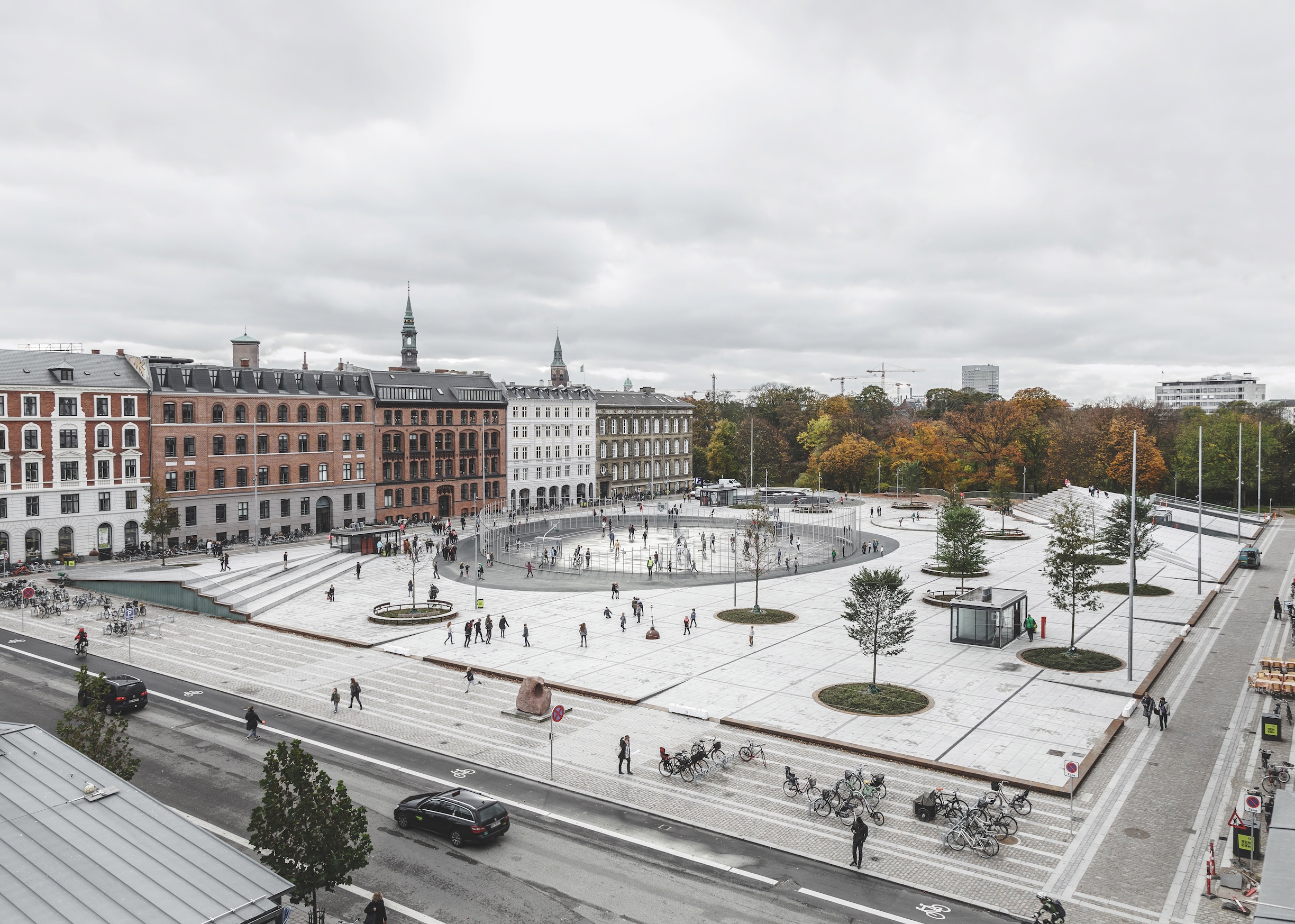 After Copenhagen’s food market moved away

Located between Nørreport Station, Ørstedsparken and the new market halls, the redesigned Israels Plads brings vibrancy to the heart of Copenhagen. Today, the multifunctional space bustles with people of all ages. 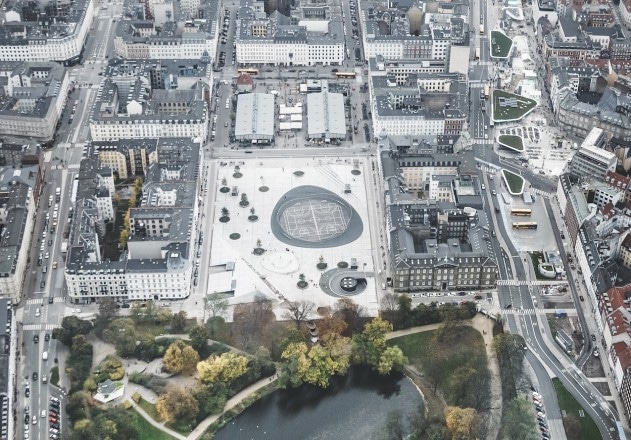 Since 2014 the Israels Plads has again become a meeting area for the surrounding city quarter. 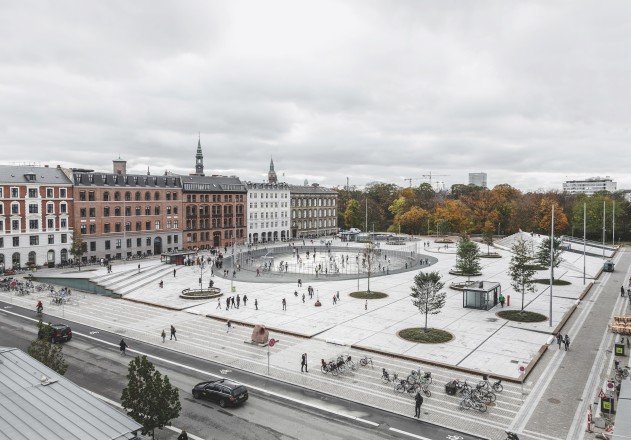 After Copenhagen's food market moved away, the Grønttorvet, as the space was named, remained without function. 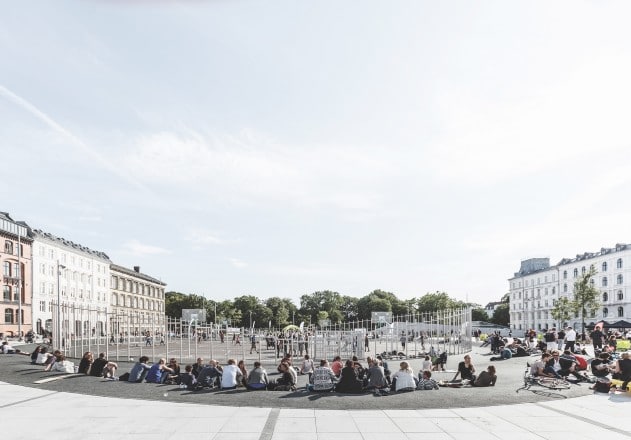 The large, oval-shaped playing area forms the center of the Israel Plads. 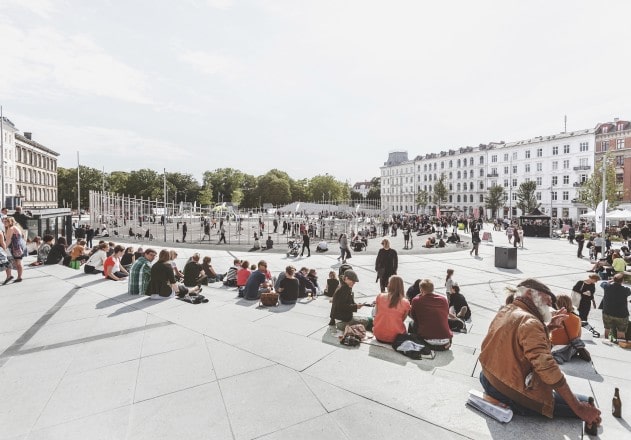 Israels Plads provides numerous offers for children and adults alike and yet an open design. 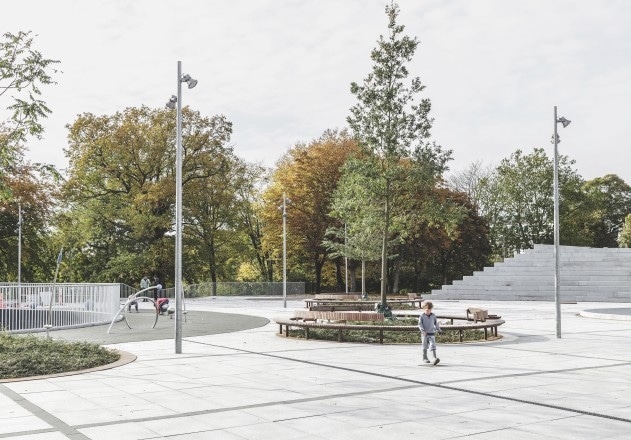 The Israels Plads reaches out to the historical Ørstedsparken, the trees "wandered" onto the square. Photos: Rasmus Hjortshoj

Israel Plads, located in the heart of Copenhagen, has been redesigned after years of funding issues, planning deliberation and community consultation. It lies next to Torvehallerne, a covered food market that replaced the traditional Grønttorvet vegetable market. The new square is a lively, informal space marking the transition to the Ørstedsparken. Ten years ago, the square was a desolate, wind-swept place, used variously as a parking lot, an area where locals walked their dogs, and an informal gathering space where students played basketball in makeshift ball cages. The space looked abandoned, messy, almost derelict. Today, it has become a place that bustles with activity and attracts many people every day.

Until 1958 the square, then called Grønttorvet, was the location of the city’s major wholesale market. This is where retailers as well as individual clients came to buy fresh food; the market was known for its charming as well as chaotic atmosphere. Soon however, the traffic and logistics that came with the market were no longer manageable in the restricted space of this inner-city neighbourhood and the wholesale market had to find a new location.

At the end of the 1950s Grønttorvet became an empty spot in the middle of the city, without any real function, and the potential of an undiscovered urban space emerged. Grønttorvet, renamed Israels Plads ten years after, experienced the same lot as other large inner-city markets, such as the famous Halles in Paris, for instance, which were forced to move to a southern suburb in 1971. The big empty spot left after this transformation created unique possibilities for establishing a major new urban square in the centre of the city.

For many years, Grønttorvet looked unattractive despite of its unique central location. Things finally began to change in 2011, when, after 15 years of political and financial quarrels, the project of the two market halls on the northern side of the square became reality. The idea of a covered food market was fortunate in its timing, for it was realized at a moment when people’s interest for new culinary experiences was growing. Torvehallerne has injected new vibrancy in a once deserted area and has worked as a catalyst, attracting people from all over the city.

The organizers of the architectural competition named the team of Sweco, COBE, Niras and Morten Stræde winners for the redesign of Israels Plads in 2007. The winning team presented a simple architectural concept for the square: a “flying carpet” that has landed on the ground, defined as a light granite surface, lifted up 25 centimetres from the ground. Different organic shapes are punched out of the granite surface, providing various sports facilities, such as a ball cage, a skating area, a playground for young children and sitting stairs.

The granite plate is recessed from the surrounding facades, leaving sufficient space for car traffic, and descends to meet the street level. Along the facades, a band of traditional Copenhagen pavement with granite slabs and Nordic cobblestones runs around the square, connecting the granite plate to its surroundings. The pavement, in contrast to the light granite of the square, is a reference to traditional Danish building materials and matches the colourful historical facades from the 18th century. […]

Read on in Topos 91 – Squares and Promenades.