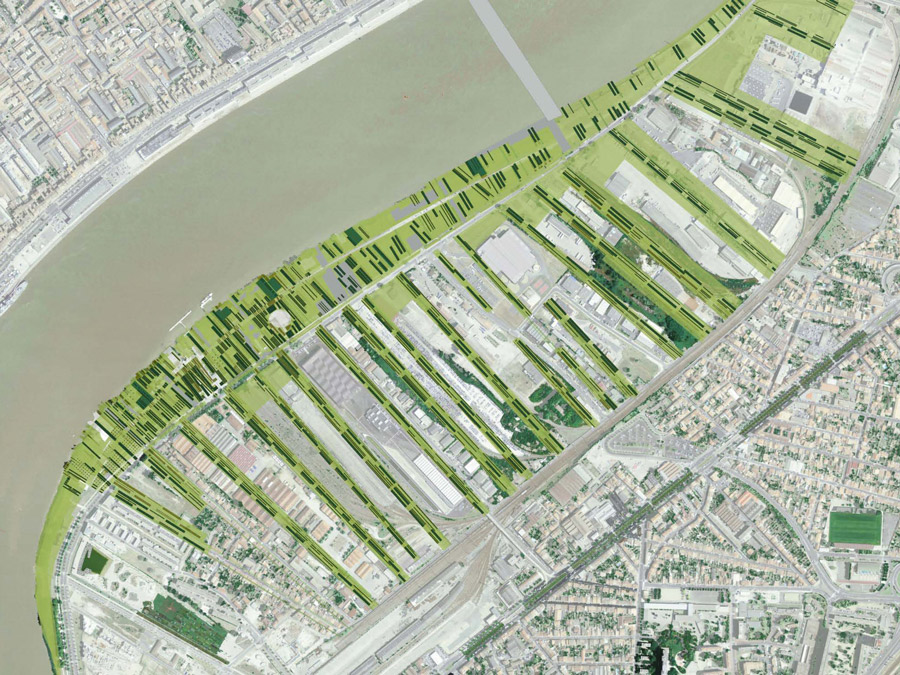 The Parc aux angéliques lies opposite the historic city centre on the far side of the river and forms a contrast to the city by retaining the natural shape of the riverbank. Linear rows of trees run perpendicular to the river.

Bordeaux’s open space has undergone continuous transformation since 2001. The urban area, however, has not been completely connected to this surrounding green space. In its search for the development of a connecting element, the city turned to landscape architects Michel Desvigne Paysagiste. Two projects completed in 2015 are a direct result of the office’s master plan: the new football stadium “Stade Atlantique” and the riverbank park “Parc aux angéliques”.

The project of enhancing Bordeaux’s green open space was originally conceived as part of the Green Plan in 2001. At that time public plazas in the city centre were continuously being rebuilt and expanded. At the same time, three new tram lines were also built. The general urban area, however, was still rather undefined and difficult to grasp in a spatial sense, as the historic city centre still had numerous vacant lots and there was a lack of connections between green open space areas and the plazas.

In 2005 Paris landscape architects Michel Desvigne Paysagiste were commissioned by the city of Bordeaux to develop a plan of how to improve and enlarge urban open space. The office then drafted guidelines and developed tools for a unified design concept, a Charte des Paysages, or landscape charter. In association with this concept, they developed a concrete planning culture together with the city’s office for Urban Ecology, Environment and Open Space Planning, which also took over construction of the projects.

The method developed consisted of a series of case studies: The office analysed approximately one dozen projects and investigated each area according to its spatial unity, borders, typologies, levels, soils and open space structure. Trial plantings on site were undertaken as a result of this empirical approach in order to test the spatial, aesthetic, functional and ecological impacts.

These methods replaced traditional regulatory planning documents and led to numerous changes and adjustments in existing development plans. They allowed for increased flexibility during the implementation of large-scale interventions, which needed to be achieved under the restraints of very limited financial resources.

The redesign of the open space around Herzog & de Meuron’s new Stade Atlantique football stadium to the north of the city centre also began with a variety of test plantings, which served as prototypes for the later design of the stadium’s forecourt. Before construction of the football stadium, which was completed in 2015 in time for the upcoming European Football Championship, began, the Parc Floral’s existing car park was extended, planted and renaturalised.

The new football stadium is located between the city’s wealthy green belt and a number of green areas near the city centre. The entire area is part of a landscape design concept developed for Bordeaux’s northern ring road. This landscape is structured by a strict geometric system of drainage canals built during the 17th century by Flemish master builders in order to recover additional agricultural land. The canals are often lined by rows of poplars.

The landscape architects were inspired by this historic element and added green verges with rows of trees to the paved surfaces they created. In doing so, the verges were cut into the original asphalt. The soil placed in the trenches they created was mixed with gravel in order to increase stability and then planted with both coniferous and deciduous trees. The linear arrangement of the trees in the parking areas is at times broken up by asymmetrical groups of trees planted between them.

The surface, which was originally completely impervious, was thus made more permeable. The measures used proved to be relatively inexpensive as well: The system of tree rows, green verges and individual groups of trees uses simple elements to connect the stadium’s forecourt with the parking area and the existing hedges, groups of trees and habitat edges on the site’s periphery. […]