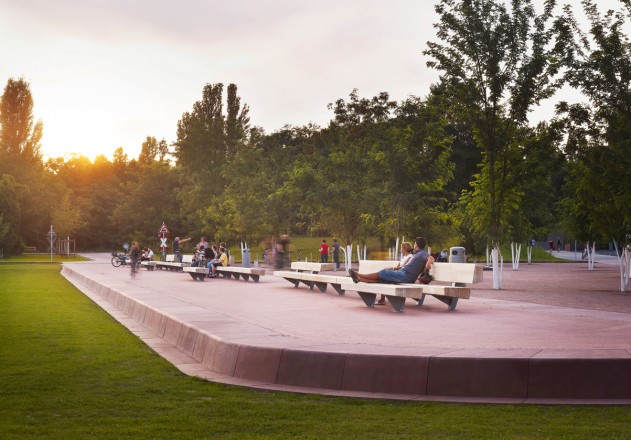 Communication was an important issue in the design of the Gleisdreieck park. Photos: Julien Lanoo

A new public park has been created at a long-unused railway yard in the centre of Berlin. The Gleisdreieck Park is a flagship project that gives the metropolis a chance to shape its image as green city. 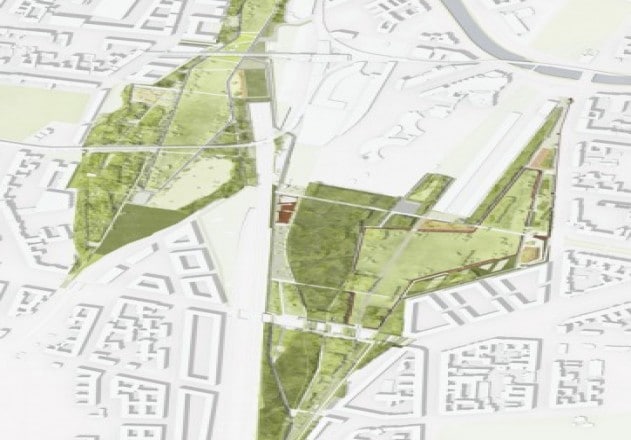 After an eight-year-long planning and construction process, the last major area of unused land in the heart of Berlin was recently made available to the public. The opening of the eastern part of the Park at Gleisdreieck in 2011, and the western part this year, turned what was previously derelict and informally appropriated land used by a small number of people into a public park attractive to many.

The railway area belonging to the former Anhalter and Potsdamer goods station, i.e. the so-called Gleisdreieck, was once an important transport hub, but was not used after 1945. The old railway lines running through the middle of a densely populated residential district were left to themselves and an ecologically valuable pioneer forest developed. During the 1970s planned highway construction was fortunately prevented due to the formation of a powerful citizen’s initiative. In the 1990s part of the site was used as a storage area for building materials needed at the huge adjacent Potsdamer Platz construction project, and compensation payments for this use were then used to help finance construction of the park.

The main elements of both parts of the park are extensive lawn and meadow areas. These are bordered by smaller areas that have a variety of specific uses, such as rest and relaxation, meeting and communicating, recreation, sport, and exercise. The basic structure of these new parks is modelled on traditional concepts of Volksparks, but is adapted to fit todays needs. The park’s planners, for instance, neither wanted to leave the potential use of its space too open and undefined, nor stipulate exactly what should occur there. The main idea was to entice people to use the park while allowing ample room for interpretation. Whether the bright green Tartan surface is ultimately used for skating, playing football and basketball, or simply as an unconventional place to sit and -relax, is left to the imagination and preferences of its users.

Another objective was to create a park that had two distinct speeds. The broad main pathways are organised in bands that give both fast bicyclists on the national Berlin-Leipzig cycle route and dreamy walkers their own paths to follow. Another issue that played a big role in the planning of the park was communication. The creation of interfaces for communication is an important prerequisite for the functioning of a pluralistic and multicultural urban society that now exists in nearly every major city. The recurring and modified motif of stages and grandstands provides users with a variety of ways in which they can interact with one another. It’s really all about seeing and being seen, which is a good starting point for a well-functioning state of coexistence. 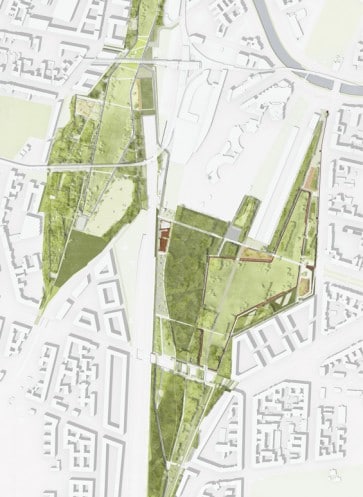 For more information on wilderness as an inspiration and the parks influence on the image of the German capital, read on in Topos 85 – Open Space.